ENTITLED is a hard-hitting piece of theatre about the real impacts of welfare reform written by MACHA Productions‘ Fionnuala Kennedy and opens in The MAC on Tuesday night and runs until Saturday (before hitting Bangor, Newry and Derry the next week).

I first discovered Arte Povera in Turin in 2003 and have been a belated fan ever since. Finn told me, as part of Prime Cut’s Reveal programme, while she had been in Paris researchng performance art she had become interested in installation work. Often, when approaching a set design, I give the director some visual art that I feels strikes a chord with the piece we are working on. So I gave Finn a book Arte Povera in Collection to have a look at.

Upshot was she took to the work of Giulio Paolini. he uses perspex in a lot of his work 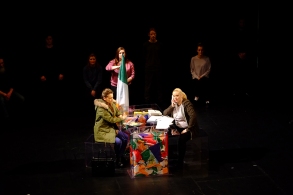 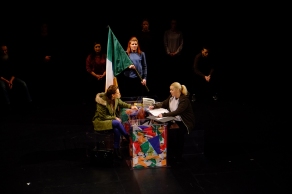